First, just a quick question: In the Age of Exploration, the Dutch came to the New World and established what is now New York. What was the port of similar significance they founded in East Asia?

You may have already got the answer—Tayouan, in today’s Tainan City of Taiwan.

Tainan is where Taiwan made its debut to the world in modern history. As Europeans set sail into East Asia in the 17th century and began what we embrace and much depend upon today, the global trade, Tainan soon rose as a trade centre for its pivotal location. Standing on the junction of south and north East Asia, it attracted the major powers of the Dutch, Japanese, and Chinese to gather here and exchange the pictures and ambitions for their development. Since then, Tainan has always been where cultures collide and amazingly enough, mesh well.

Today, this south-western city in Taiwan has turned into an energetic city that embraces a balanced growth as well as its rich cultural legacy. Tainan has been developing green energy technology, hosting demonstration fields for innovative ideas to be tested and linked to production. With brains from national research institutes and brawn of the world’s top semiconductor manufacturers, Tainan Science Park is building the world’s largest IC industry cluster. The connection with international communities is, once again, at the center stage of the city.

Around that center is the ICC Tainan to boost cross-border exchanges virtually or physically. The venue of 5.2 hectares, lying right next to the Tainan high speed rail station, houses 8 conference halls, two ball rooms, adding nearly 2,800 m2 to Tainan’s convention space, and is also home to an exhibition hall of 10,700 m2. Though not grandiose in the category, it is equipped with 5G, AI, and XR technologies, the combination of which renders its capacity free of physical boundary. Though young and new, ICC Tainan connects the historical city of over 400 years to the world to an ever-higher level, fostering new opportunities for limitless collaborations. 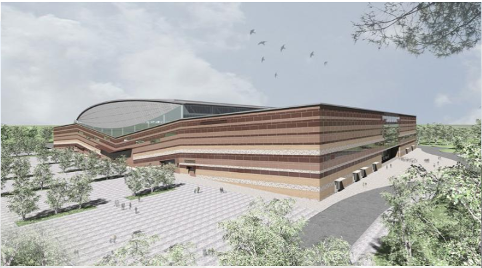 The architecture takes symbols from a whale as a tribute to the city’s maritime history and will be finished with red brick outer walls that resemble the old city barricade. 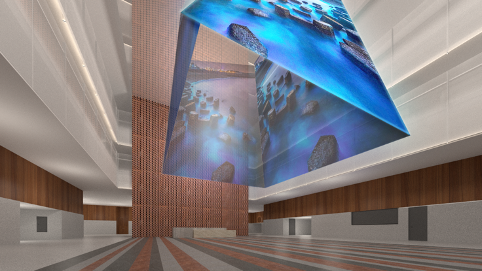 Simulation of projection mapping in the lobby