The importance of legacy and the many ways this can be achieved shone through at the IMEX Gala Dinner Awards which took place at the Sheraton Frankfurt Airport Hotel last night.

The Awards, part of IMEX in Frankfurt which is currently taking place, brought together meeting and event professionals from across the world and celebrated their outstanding achievements. The glamourous gathering was rounded off with live music from Song Division Sound Machine.

The winner of the IAPCO Innovation Award has created an inspiring environmental legacy. The Award commends the most creative and high achieving young member of staff at an IAPCO member company. It was presented to Amber Chen, Assistant Vice President at GIS, Taiwan for her work in transforming a local neighbourhood into an ecomobile community and educating children on the benefits of ecomobility. 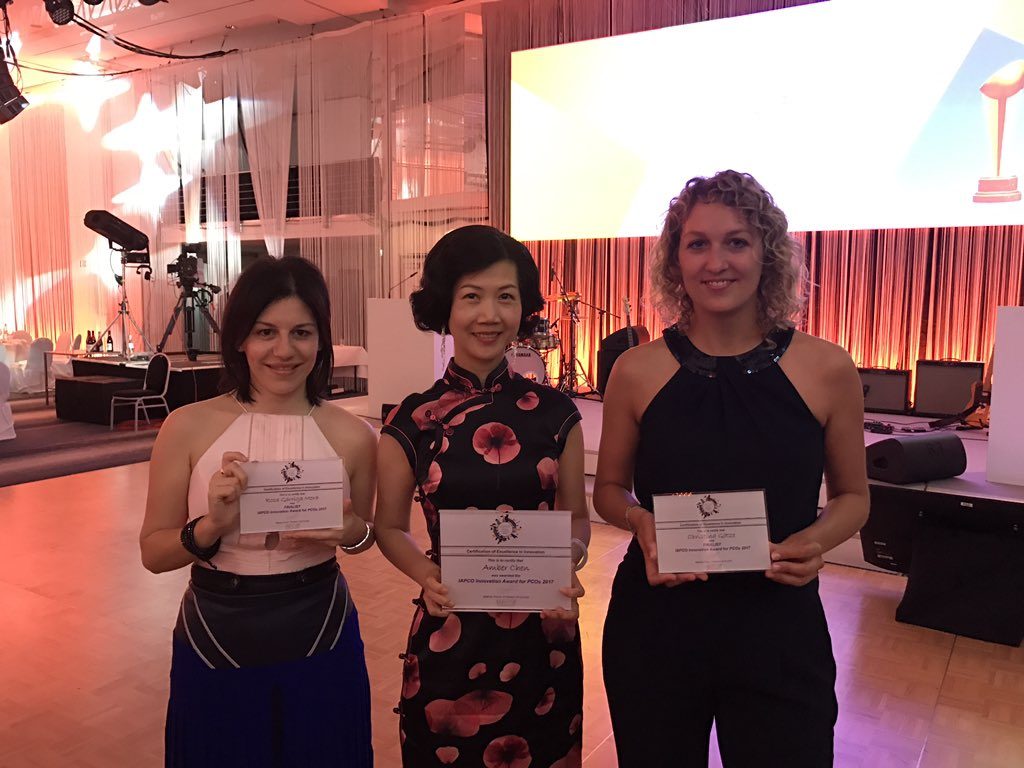 The Destinations International Global Ambassador Award, recognising an organisation that goes beyond its local impact and demonstrates significant leadership and commitment to the global community, was presented to Turisme de Barcelona. The award was given in honour of the organisation’s perseverance and strength to bring knowledge and understanding to issues and policies that impact the international tourism community.

The IAEE International Excellence Award recognises exhibitions that have made exceptional strides as an international event. EXPO PACK Guadelajara, produced by PMMI (the Association for Packaging and Processing Technologies), won the award which recognised their growth from a regional show in Western Mexico to a truly international event that welcomed nearly 16,000 attendees last year.

Karen Bolinger, CEO of Melbourne Convention Bureau and winner of the JMIC Unity Award, has built a powerful social legacy. She volunteers her time with industry organisations, leading innovative initiatives within her own country and mentoring the development of young professionals. Karen was duly recognised for her significant contributions to the advancement of the meetings industry and the level of professionalism it represents.

Rising star Praeploy Petretti from Chiang Mai University in Thailand was presented with the MPI Foundation / Maritz Global Events Student Scholarship Award. The award, which celebrates and supports the next generation of meeting planners, is part of the IMEX-MPI-MCI Future Leaders Forum International University Challenge. At the final of the Challenge, held at IMEX in Frankfurt, the regional winners competed for the grand prize, sponsored by the MPI Foundation.

In recognition of his passion for the advancement and education of the global meetings industry and his vast cultural understanding, Ben Goedegebuure, Global General Manager Europe, Middle East and Africa (EMEA) at Maritz Global Events was named PCMA Global Meetings Executive of the Year. Throughout his career Ben has worked across all business event disciplines and demonstrated real commitment to weaving culturally conscious practices into each of the 25 countries where he has held events.

The energy, enthusiasm and collaborative spirit of Miek Egberts, Founder & Managing Director of InspireME Monte Carlo, was honoured by the Jane E. Schuldt SITE Master Motivator Award. This Award is presented to an individual who holds the highest standard of excellence in creating or executing motivational events.

Environmental legacy is at the forefront of the IMEX EIC Innovation in Sustainability Award. The award was won by SMG Salt Lake: Salt Palace Convention Center & Mountain America Exposition Center for their work on the APEX/ASTM certification. This certification has led to the reduction of the venue’s local carbon footprint, funding for a brand new sustainability department, and partnerships between SMG, Visit Salt Lake, Utah Food Services, and PSAV to deliver sustainable event planning.

Carina Bauer, CEO of the IMEX Group, says: “Legacy is currently at the forefront of our activities as our Talking Point for this year. The IMEX Gala Dinner Awards celebrates legacy, be it social, environmental, personal or professional. We have re-named the Academy Awards the Paul Flackett IMEX Academy Awards in honour of our great friend and colleague – a man who left a powerful legacy of his own.”