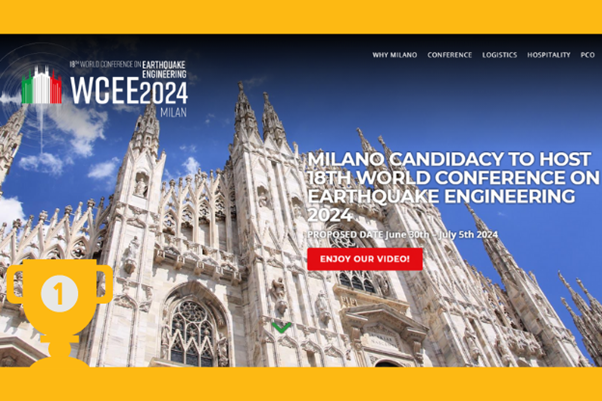 A close collaboration and a creative approach between the academic world, engineering companies,
the city and the PCO guaranteed the success of the WCEE bid.   AIM Group International, the professional congress organiser, was one of the promoters of the candidacy.

Milan will host the 2024 edition of the World Conference in Earthquake Engineering (WCEE). This is the most important international scientific event in the field of seismic engineering which is held every four years with about 5000 expected delegates in Milan.

It was the real team effort, which determined the success of the bid. Strong synergies were created by bringing together the two academic associations: Anidis (Italian National Association of Seismic Engineering) and ISI (Italian Seismic Engineering), the corporate sector as well as AIM Group International. The support of the Eucentre Foundation (European Center for Training and Research in Earthquake Engineering) was also fundamental, as well as the involvement of the local institutions, MiCo Convention Center, the location which will host the event, and major companies active in the field of earthquake engineering in Italy.

The congress will return to Italy from 30 June to 5 July 2024, 51 years since it was celebrated in Rome in 1973.   “We are really happy with this result, which confirms that Italy represents an excellence in the international scientific scenario and a reliable conference destination. We worked with great commitment on this project, designing an innovative and creative bid dossier. Our Group has believed in this ambitious project from the beginning and has invested in a long process that led us to this important acquisition” explains Flaminia Roberti, Global Sales Director of AIM Group International.

“Normally we were due to present our bid during the 2020 edition of WCEE which was due to take place in Japan. Due to the pandemic, that congress was postponed to 2021 and the presentation of the bid was moved online” says Marica Motta, Sales Operation Coordinator of AIM Group International. “We decided to create a website-event www.wcee2024.it to profile the entire project. An emotional and motivational video produced ad hoc explained to the delegation the strong desire of the City to welcome delegates to the city. It also included a series of video support messages from international key opinion leaders and  important institutional endorsements together with a long list of 75 supporting sponsors (representing associations and companies)”.

This communication strategy struck a chord with the IAEE Board. Other distinguishing features included technical visits to the behind-the-scenes construction of the Milan Cortina 2026 Winter Olympics and to the exceptional Shake Lab of the EuCenter Foundation.