IAPCO is very sad to announce the passing of a founding and pioneering member of our community – Gideon Rivlin.

Gideon Rivlin founded Kenes Group in 1965 and served as its president and chairman of the board. He was among the leading advocates of IAPCO. Gideon helped the association advance during his presidency between 1981-1983. The IAPCO community, together with Gideon, celebrated the association’s 50th anniversary in 2019 in Basel, Switzerland – memories that we will cherish forever. Gideon’s legacy continues today with the current IAPCO President – Ori Lahav.

Ori Lahav commented: “Last year in Vancouver during our annual meeting, while I stood on stage for the official presidency ceremony, I shared how privileged I am to continue the legacy of Gideon Rivlin as the IAPCO president. Gideon believed in bringing people together and the high standards that he insisted on are serving as a model in our industry today. It is a sad day for the Kenes family and our industry – we will miss him a lot.”

“I have known Gideon since 1981”, said Sarah Storie-Pugh, Operations Director of IAPCO, “when he hosted his second IAPCO Annual Meeting in Tel Aviv, and am happy to be able to call him my friend. He was a forerunner of our industry and within IAPCO, and his legacy will live on, of that there is no doubt – through his son, Danny, our current President – Ori, and the rest of the enthusiastic and professional Kenes team. Our thoughts are with his family”.

Gideon will always be remembered for his vision and pioneering spirit and he will be greatly missed by all. 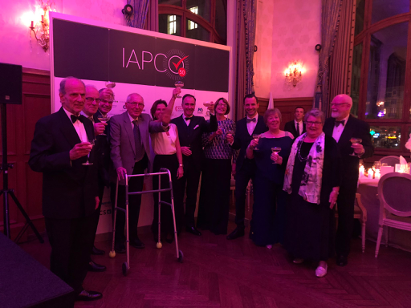