IAPCO infographic goes around the world for #GMID17

Can one picture tell a whole story? That might just be the case, at least if the reception that the most recent IAPCO infographic received on social media is anything to go by. Designed to publicise good news for IAPCO members on Global Meetings Industry Day, it highlighted the fact that employment figures have recovered to an all-time high after the financial crash of 2008, with 5761 full time staff members, compared to 5429 in 2015. Launched under the hashtag #GMID17, the IAPCO twitter feed received over 16000 impressions in the first 24 hours. 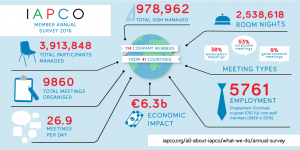 The infographic highlights the IAPCO membership, which now numbers 114 company members from 41 countries. Within this network, the infographic reveals that IAPCO members were responsible for nearly 27 meetings a day, with an equally staggering total of 3 913 848 participants managed across 978 962 square metres of floor space. Perhaps even more significant is the economic impact: IAPCO members are estimated to have generated around €6.3 billion, an enormous figure which shows the global impact of the meetings industry.

In only one area has growth remained slow, and that is in the number of room nights booked, a total of 2 538 618 representing less than one night [0.64] per participant registered, thus showing the impact of alternative ways of booking accommodation, such as Airbnb, which undoubtedly is making inroads into the hotel industry.

And in the meantime, 20 companies around the world took part in putting their faces to the statistics, using #weareIAPCO and #GMID17 to show the world what their employees looked like. From New Zealand to South Africa, across Europe and into Canada, a host of companies used Twitter to share their photos and, in so doing, publicised both IAPCO and what they do to the wider world. While Global Meetings Industry Day may be over, the #weareIAPCO hashtag remains active, encouraging IAPCO members to continue sharing their stories as we start working our way towards Global Meetings Industry Day 2018.

About IAPCO
IAPCO (International Association of Professional Congress Organisers) is the leading international association for professional conference organisers. Its mission is to raise the standards of service among its 114 member organisations and other sectors of the meetings industry through continued education, connection and support. For further information, please contact:
IAPCO Head Office: Email: info@iapco.org www.iapco.org