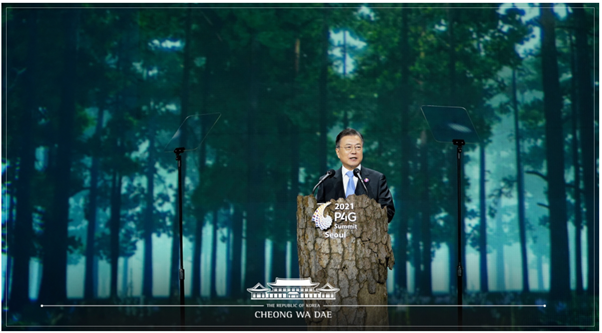 The P4G (Partnering for Green Growth and the Global Goals 2030) Seoul Summit hosted by Ministry of Foreign Affairs, Korea was held in Seoul on May 30-31 and IAPCO’s member Ezpmp managed the whole organization of this hybrid event successfully. P4G is a global initiative that was launched in 2017 to accelerate response to climate change and achievement of SDGs, the world’s biggest pending issues. When the first meeting in Denmark was held in October 2018, Korea designated as a hosting country for its 2nd Meeting in 2020, but it was postponed for a year to May 2021 by Pandemic. With about 50 top-level and high-level officials, and heads of around 20 international organizations attending, in particular, leaders of 12 countries participated in the live online multilateral meeting.

Unlike the previous meeting, the meeting was held in the middle of the Pandemic, with opening and closing ceremonies, summit meetings, five general sessions, and 10 special sessions online. The summit’s ‘Virtual Event Platform ‘ consists of seven sections:  ● Program, ● Summit ● Green Future Sessions ● Thematic Sessions ● Networking Lounge, and ● Side Events. This online event platform boasts its efficiency, for example, program schedules, often uploaded as an image file on other event platforms, were hyperlinked on the P4G platform, so people can click the schedule to see the details or the live broadcast of the corresponding session. These features were available for all sections – Green Future sessions, Thematic sessions, or the summit, in the same manner.

In addition, each session had a good digest of its basic description, speaker’s affiliation, history, and photos, which made it easier to play the video immediately. All P4g sessions were broadcast live in real-time, provided translation services (including subtitles) in both Korean and English languages, and allowed real-time and replay anytime, anywhere through YouTube.

This P4G was the first Head of state’s Virtual Summit held by South Korea, and the first environmental multilateral summit, which also be an opportunity for Korea to showcase various technologies. For large-scale events, a lot of wood backdrops and equipment are used to form the venue, stage, etc. In the opening ceremony of the Seoul Summit the host start a new trial with three-dimensional cover of images of ‘Inwang jesaekdo (Scene of Inwangsan Mountain After Rain, one of the masterpieces of Korean arts) based on Korean landscape and folk paintings. This is mapping technology, a kind of augmented reality turning white wall quickly to a canvas of great masterpieces.

When South Korea’s president Moon Jae-in delivered his opening speech at the opening ceremony of the Summit, the white wall against him has turned into a forest with tress and plants. Especially above endangered animals and plants appeared on the screen with augmented reality technology and create so much wonder from people watching the ceremony.

The only thing that actually appeared at the opening ceremony was the dead trunk of Geumgangsong, Korean pine tree affected by pine wilt, but the harmony of various technologies created a screen that talked about climate change in the middle of the forest. After the opening ceremony, there were no wooden backdrops, LED panels, or other decorations to be removed at the site.

The introduction of these technologies was a very valuable opportunity to think about and practice what the MICE industry should do to cope with climate change, beyond showing the technologies applicable to the meeting field.